Health and lifespan of cows is associated with the start of a lactation. Results of a recent study at Dairy Campus show that cows that successfully reach the next parity, have higher fatty acid concentrations in blood in early lactation, and also have a higher milk production with less variation in milk production between lactation days.

The assumption was that dairy cattle lifespan is related to a successful start of her lactation. Problems with the start of lactation are often related to a disturbed metabolism of the cow at this moment. The cow's metabolism can be measured in blood, but possibly also in milk. To this end, we have followed 455 cows on the Dairy Campus that calved between April 2018 and June 2020. In this study, blood and milk samples were collected at weeks 3 and 4 of lactation and milk production was measured daily. In the milk samples, Fourier-transform infrared spectroscopy (FTIR) profiles were determined; not only to estimate the fat, protein and lactose content, but also to use these profiles to estimate the fatty acid content in the blood as an indicator of metabolic status. The cows were then followed until the next calving moment.

Cows that did calve again, and thus had a successful lactation, had higher milk production in early lactation, less variation in milk production between lactation days and there was a tendency for a higher lactose content in the milk. Also, blood fatty acid levels estimated from the FTIR profiles in milk were higher and there was a trend for a higher plasma fatty acid concentration based on the actual blood samples for cows that reached the end of the lactation and calved again.

The results of this study were not entirely in line with expectations and with previous studies. It is known that a disturbed metabolism in early lactation is actually accompanied by high levels of fatty acids in the blood, resulting in cows not surviving the current lactation. However, the elevated blood fatty acid levels in the current study were not extreme for most cows. It could be that in this study the increased fatty acid concentration actually represents an increased metabolic rate and higher production level of the cows than that it represents health problems in the early lactation.

This research is a collaboration between Perkin Elmer (formerly Delta Instruments), Wageningen University & Research and Dairy Campus and funded by the Innovation Fund Dairy Campus and Perkin Elmer. The Innovation Fund has been made possible by SNN-REP (Samenwerkingsverband Noord Nederland - Regional Economic Program). Results have recently been published in a report (EN). 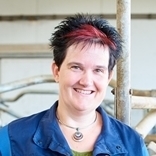